IVY Billiot is a self-taught artist who hand carves and paints the birds & animals who inhabit his home territory of Houma, Louisiana.  Houma is not only home to abundant water and wetlands, but a culture rich in traditions of the Houma Indian Nation.

Ivy’s father, Cyril Billiot, was a major influence and a wood carver himself, but Ivy found his own voice, his own visions and refined his sculptures in his own way.

Single and now in his mid-70’s’s, Ivy has recently experienced ill health and we are super thrilled that he has recovered and begun carving again.  For much of his working life he was a chain saw operator, but in the mid-1980’s he began carving and sculpting full time.

Ivy uses primarily Tupelo, Cedar, and bass wood, but has branched out recently to using cypress or white pine, as Tupelo has become more and more difficult to source. He uses acrylic paints and recently began adding an iridescent coat of paint where appropriate.

If you would like us to notify you when we have more of Ivy’s charming birds, just send an email to: folkart@amerifolk.com . 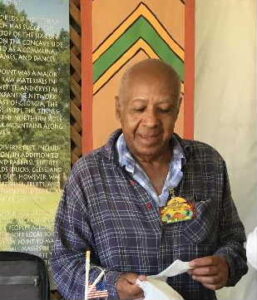 Such a sweet man!