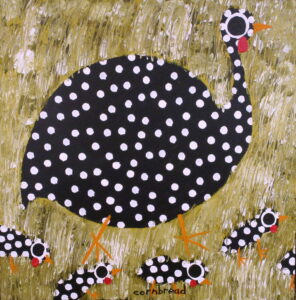 “Cornbread,” as he is known to his family and friends, was raised on a farm in Lumpkin County, GA. He loved to paint as a child but as an adult he was so embarrassed by his efforts that he hid his art work under beds and in his basement. Around 1995, he began seeing native regional painters, and realized that not all ‘good art’ was in the style of the old masters. When he finally shared some of his paintings, he was amazed when they sold, and even today he is still amazed & thankful.

Using bright acrylic colors and large pieces of wood, he captures what is fast being pushed out as rural spaces change, or even disappear. He draws his subjects from the farmland he works & the woods he hunts.

Cornbread’s foxes & guinea hens are his most widely recognized animals. The fox is often in a scene where he is hunting prey, such as birds, snakes or beavers. He is in the tall grass, the grapevines, or running through the woods in pursuit of his next meal. The delightful guinea hen paintings have evolved over the years and remain the most endearing creature to Cornbread’s fans.

Beyond foxes and guinea hens, Cornbread loves to paint birds. He frequently comments on the beauty of a red-headed woodpecker or a hawk in flight. His paintings have included quails, turkeys, whippoorwills, black crowns, bluebirds, roosters, hawks, eagles and the one-legged chicken he once had on his farm.

Although Cornbread doesn’t like to be called deeply religious, his love of God is very obvious in his work. He regularly tries to find ways to reflect the bigger picture. Each painting has significant meaning or story for him, sometimes written on the back. Cornbread paints because of his passion, which combine with his humor, honesty, and modesty to make him one of the most beloved folk artists of the South.

We are currently out of Cornbread’s paintings, but if you would like us to send you an email when we have more, just email us at folkart@amerifolk.com